Home » Travel » From Santorini Villas to the Top of the Rock

One of the best things I have ever done in my life is the hike and climb to the top of The Skaros Rock.

I will always remember my first glimpse of Skaros Rock.  Our Team at Exceptional Villas were visiting The Greek Islands and were doing onsite inspections viewing all the Santorini luxury Villas. 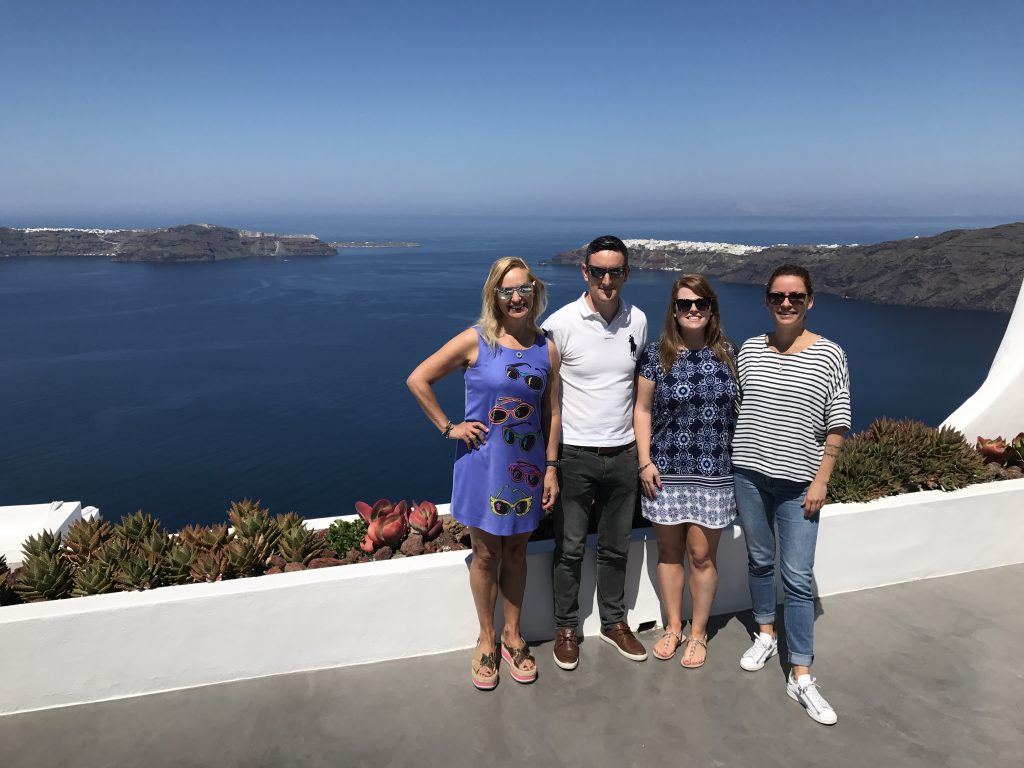 Alex, Sean, and Linda at work in Santorini

We have a hard job right!

We were on the terrace of the stunning Erossea Villa which, on a side note, is one of the best villas in Santorini that we have ever come across and a personal favorite of mine and our teams.

Every part of the villa is gorgeous, the view is breathtaking, and it is one of the best places to stay in Santorini. There is a fabulous view from the terrace and pool area to Skaros Rock, and I had an overwhelming need to stand on the top of it and look out to sea. 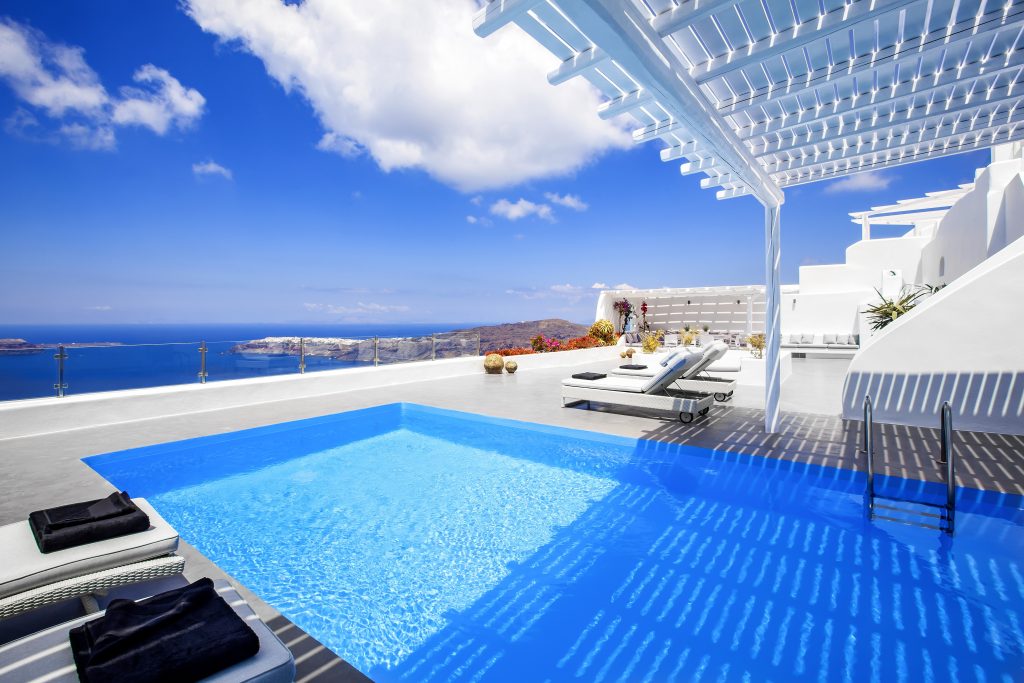 Even from a distance, the top of the rock looked unique.

It was calling to me.

The rock is on a conically shaped peninsula and rises about 20 meters from the base. The top of the rock is about 300 meters above sea level, and it is separated from the mainland by a narrow ridge with a good walking path.

The climb from my view looked a little daunting as the rock from the land side seems like it is sheer and vertical stone all the way up. 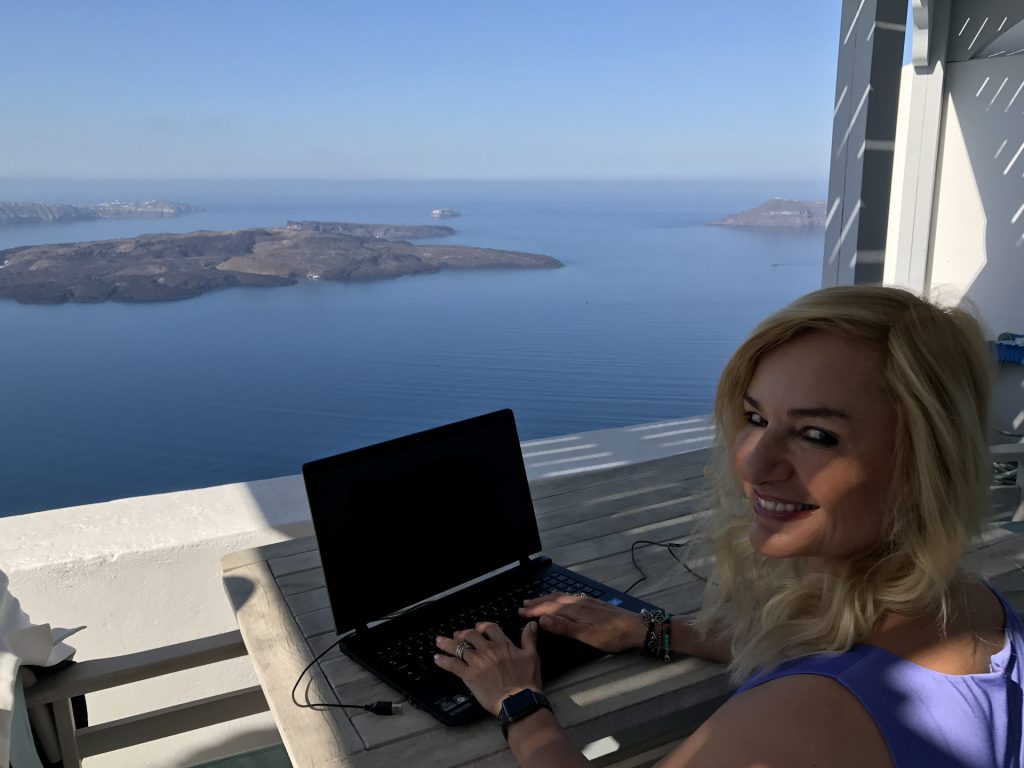 Alex radically redefines the concept of an open-plan office

That evening after a full day of looking at luxury Santorini villas, we set off from the fabulous Villa Gaia where we were lucky enough to be staying in the middle of the charming village of Imerovigli. From there we walked in a northward direction for about five minutes.

This first part of the hike was simple enough, and you descend about a 100 meters down a winding cobbled street and steps.

Just a little way down the path, you pass Anastasi Church. 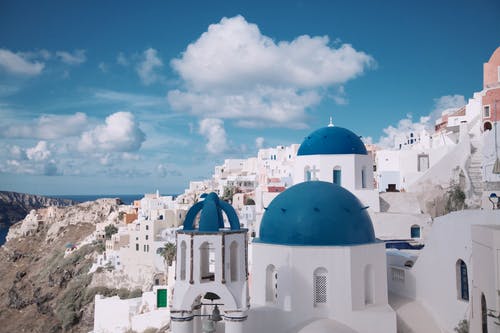 It is a stunning Blue Domed Greek Orthodox church and one of the most iconic and photographed churches in the world. It is worth taking a few moments here to sit and just enjoy the amazing view of the Caldera and of Skaros which lies in front of you.

On the edge of the churches veranda, there is a marble sign to commemorate the fact that Saint George was rescued from this very spot. Soon after leaving the Anastasi Church, you pass the luxury Grace Hotel which is one of the most beautiful places to spend a honeymoon on the planet. 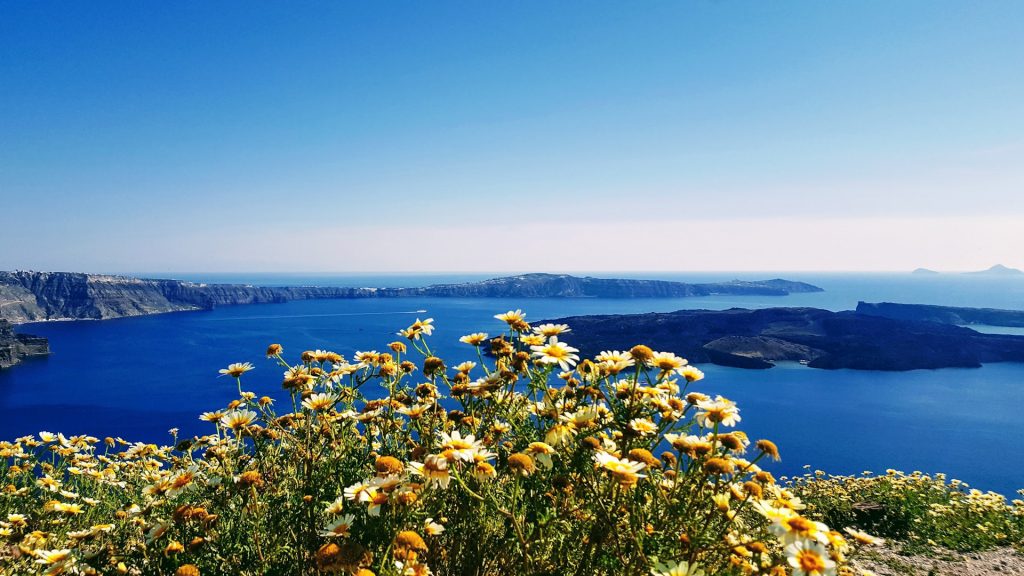 In Santorini, even the flowers are happy.

After that, the path evens out for a short bit before you start to ascend the rock itself.

The views all around are breathtaking, and you will see nature at its very best. We were lucky enough to do the hike in May, so the pathway was a profusion of wildflowers and colour. The formation of the rock is striking and has dark grey and red lava that has mixed with ashes, pumice, and pozzolana.

The climb is easy enough up until you get to the last section. This bit is not for the faint-hearted and several other people attempting to climb the rock at the same time turned back at this point.

Once you are wearing non-slippery shoes, have a reasonable level of fitness, and you are not worried about heights, then the climb is easily doable.

And boy is it worth it. 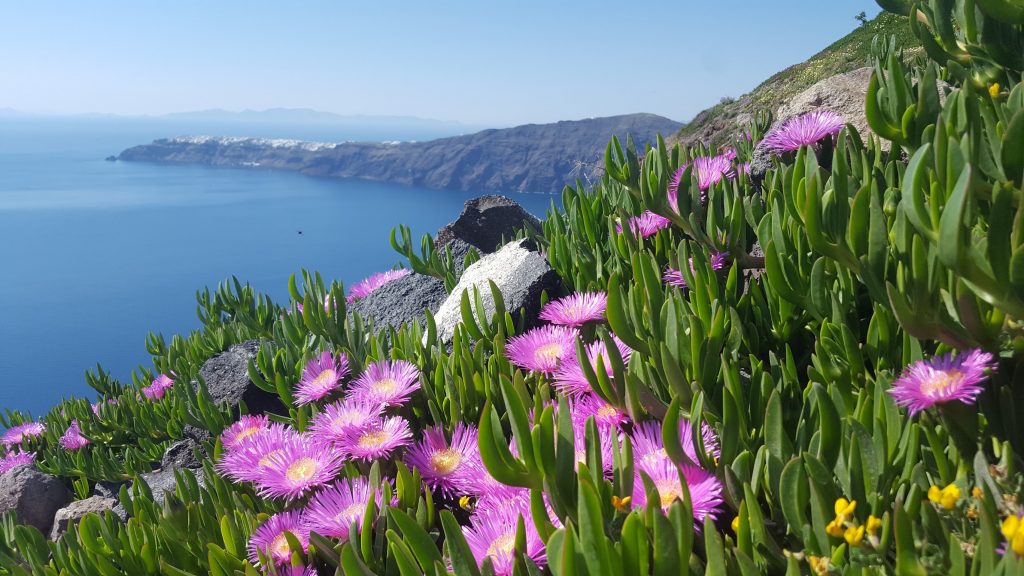 …or enjoy the wild flowers

The feeling of reaching the top and seeing the incredible view all along the coastline of the Caldera in Santorini, the blue turquoise sea and islands on the other side made me speechless. You can see the whole coast of Santorini behind you from the tip of Oia to the other tip of Akrotiri where the famous lighthouse located. In front, you can see the volcanic crater as well as the islands of Kameni and Thirasia.

Thirasia was made famous recently as it is one of the places that Brad and Angelina spent their last holidays in a Luxury Santorini Villa.

At the top, I sat in silence for more than half an hour and felt a sense of peace and happiness like I had never experienced before. Selfishly I was happy no one else did the climb as we had this piece of heaven all to ourselves. 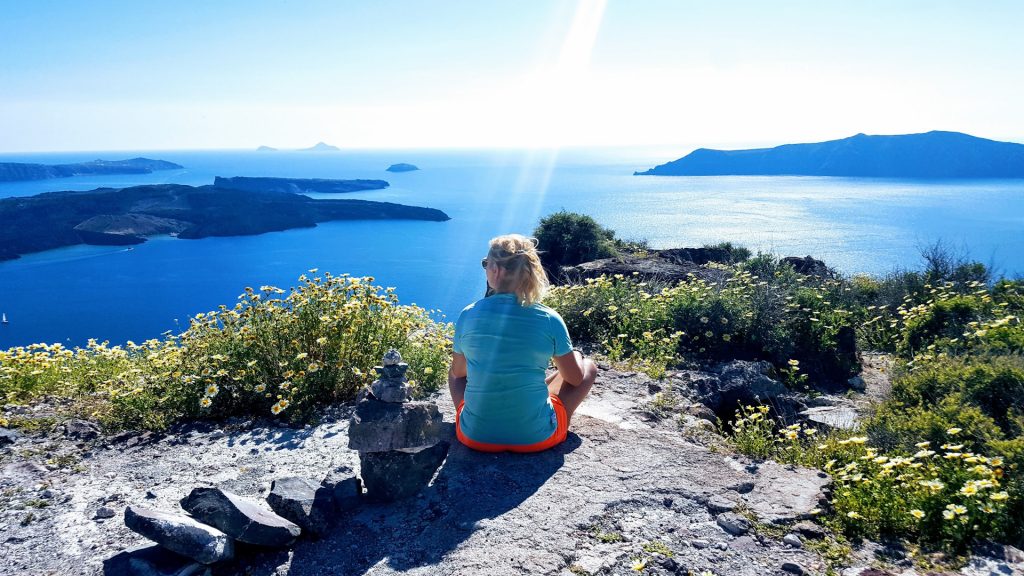 One of the best parts is that Skaros Rock is not just a beautiful piece of nature. It has an incredibly rich history.

Skaros Rock was the capital of Santorini until the start of the 18th Century. The rock was originally one of the five fortified settlements during medieval times of Santorini. The Skaros Rock fortress was also the most important one. Because of its location, it offered the people excellent protection from Pirates.

The original castle was called Epano Kastro which translates as Upper Castle. The Castle built in the late Byzantine years by Giacomo Barozzi who was a Venetian living in Santorini at the time. Following the castle, a settlement grew up around and below the castle.

The rock is small, and it was very densely populated with more than 200 houses dotted around it. It was an entirely Catholic settlement, and at the top, there was a large bell which was rung any time there was danger approaching.

Unfortunately for Skaros Rock, it has repeatedly been shaken by earthquakes over the years, so there is little of the settlement left to see other than some stone ruins.

But there are some excellent drawings and lithographs from those times which give us a great picture of what life was like during the Byzantine and medieval period.

These pictures also make you aware of the power of nature in that it can transform what was once a flourishing centre of civilization into a pile of rocks.

Following the earthquakes and eruptions during the 16th and 17th Century, the capital of Santorini moved to the town of Fira where it remains today. All the Venetian Noble families who lived on the rock moved to the mainland around this time.

Today Skaros Rock is completely uninhabited except for the almost secret small church which stands on the north side of the rock.

The church is completely invisible from the mainland of Santorini and so the only way to see it is to either walk down the north side of Skaros Rock or take a boat and see it from the sea. 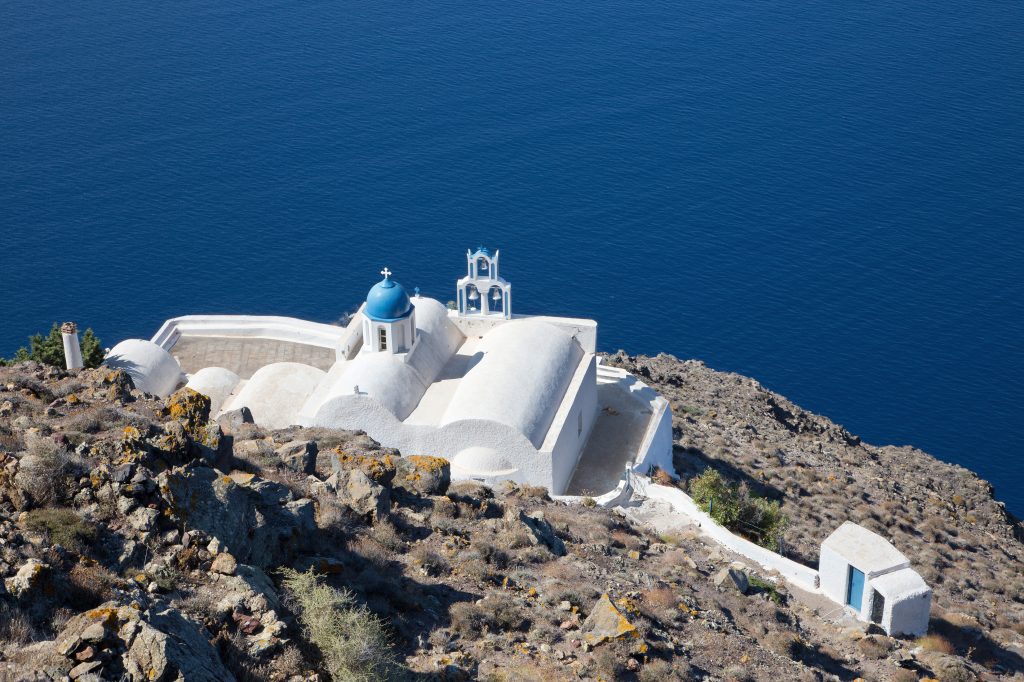 When we made the climb down from the rock, our breaths were taken away once more when we not only first sighted the chapel of Agios Ioannis Apokefalistheis but also by the fact that at that moment, a man proposed to his future wife beside the chapel on bended knee.

We decided to leave the romantic couple in peace, but if you do fancy walking down, there are 200 steps to the bottom. The church is truly magical and remote. It is a peaceful and tranquil place to sit and meditate and soak in the beauty that surrounds you. 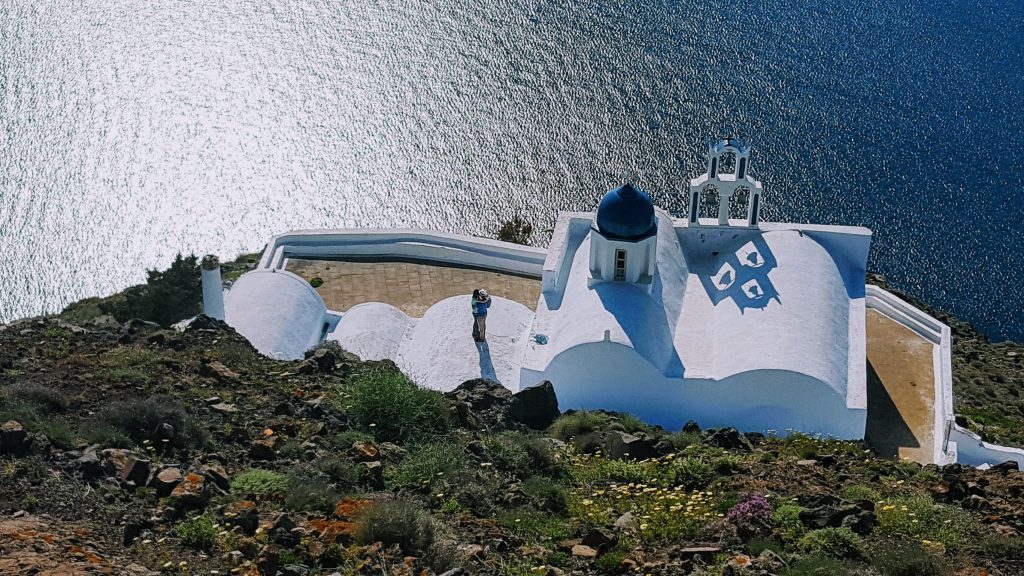 The way back is equally magical and equally strenuous.

You will need to bring water to keep you going as you walk up the steep path from the base of Skaros to the village of Imerovigli. We would highly recommend a stop at the Grace Hotel which you pass on the way. If it is early evening, settle in over a cocktail with a view of where you just stood as the sun goes down over Oia. 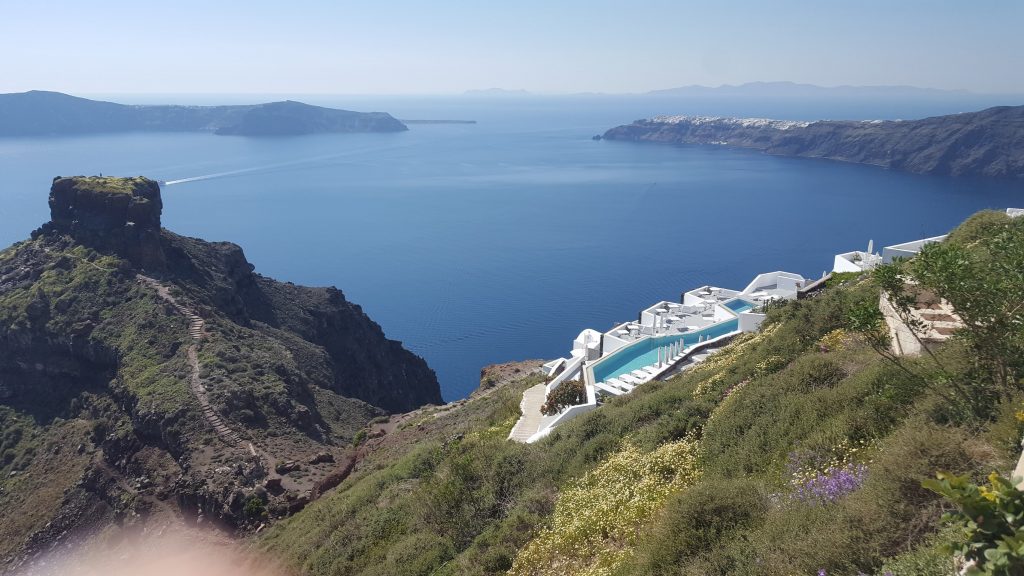 I have completely fallen in love with Santorini and the Greek Island and I am very sure I will be back for many more visits in the near future;  not just to inspect the local villas for our clients but also to spend some wonderful vacation time.

The whole experience of Skaros Rock was perfect. It was a moment of utter joy that made it into a memory of a lifetime and one I will never forget.

We love to hear from you so please leave a comment or if you have any questions, please email me directly on [email protected] or to contact us by phone Click Here for Details