The West Indies Cricket team is rather lovingly referred to as the Windies.  Since 1928, when it attained Test status, this remarkable team has entertained and intrigued the cricket world.  With players coming from any of the 15 Commonwealth, from Barbados to the Jamaica, or Overseas Territories that combine under the Windies banner, it is a unifying group that draws together diverse island communities in the pursuit of sporting glory.  The word pride is always used when describing this remarkable team.  The other word is passion.  There has always been a ferocious edge to how they play cricket.  They are not some colonial outpost clinging on to a dim and distant past.  They are a team that embody the collective confidence and self-belief of many races and heritages.

My history with the sport of cricket dates back to 20 June 1996. I had the great good fortune to be invited to Lords cricket ground (the All Hallowed cricket grounds of MCC) to watch an England / India test match. What elevated this game to mythical proportions is that in addition to its being the very first Test outing for Sourav Ganguly and Rahul Dravid it was the very last test match to be umpired by the legendary Dickie Bird.

I am interested in sport. I’ve been to Highbury to watch Arsenal in action.  Same too, for Spurs at White Hart Lane. I’ve attended a Wimbledon final. The Windsor Cartier Polo stands out. I’ve been lucky to attend more than one All Ireland GAA football final. Yet all of these outings couldn’t really compare with the charm, tradition and graceful elegance of a day at Lords. For that’s really the key difference.  Cricket involves an entire day out … sometimes even more than one day, if you attend a test series.

So on a gloriously sunny day in June 1996, my lugubrious host opened the well-stocked hamper and we launched ourselves on the cricket spectacle in front of us.  As I sipped on my glass of champagne, I thought, “Ahh, now this is sport”!

What followed was a blur of cricket, a leisurely break for lunch when we retired to a nearby restaurant.  Back to the Lords for more cricket followed by tea. I don’t think I recall any of the specific details except the overall glow of a civilised and leisurely day out in beautiful historic Lords.

So here’s the thing … cricket charms everyone.  It’s the world’s second favourite spectator sport after football.  Anyone reading this who is on the fence, so to speak, about the game, I whole-heartedly recommend you take in a match sometime soon.

I think the pleasure in cricket lies in the sartorial style that spectators adopt.  Think blazers, club ties, the ubiquitous Panama hat for the gentlemen.  For the ladies, it’s a pretty floaty summer frock and some chic sunglasses.  These clothes demand blue skies and languorous days watching the dazzling white cricketers do what they do best.  Where better to really revel in the sunny perfection than on the perimeter of some glorious Caribbean cricket club.  The whole of nature seems poised to ensure the outing is cricket at its finest.

As a sport, cricket is centred on the local village.  The village green is literally the grass-roots of the game.  Every small village in a cricketing county has a perfect patch of green where amateur players congregate to practice or play this historic game.

The next step on the ladder of cricket is the game played at County level.  This is what makes it such a tribal sport.  It’s county vs county in the UK.  The same is true of cricket across the globe: it is small communities, districts, provinces all competing and ultimately building an incredible national team from the crème de la crème of players from all across its territories.

Unlike football where a cheque book can buy a player from anywhere to swell its ranks, the cricketer generally remains within his county or country.

In the West Indies, what you find is that so many of the islands like Antigua, Jamaica, Barbados, St Lucia etc have their own cricket teams and the inter-island competitions keep the national spirit of each island nation to the fore.  When these players come together, it’s a unifying event that weaves a thread that links all of these islands under the banner of the West Indies Cricket Team.

Cricket West Indies dates back well over a century ago.  It was one of the great English exports that travelled with colonists.  The game took root and has become the national sport of these islands.

The various national badges that countries use for their cricket kit range from a tiger for Bangladesh, shamrock for Ireland, Sri Lanka has a golden dragon.  Nothing really comes close to the splendour of the West Indies cricket badge.  It’s a pretty island, sitting in a calm sea, with a palm tree, a shining sun in a clear blue sky.  The presence of a yellow wicket in the image is the only clue it’s a sporting insignia.  It’s not so much a badge as a tourist brochure!

Anyone who’s been fortunate enough to arrange a holiday to the Caribbean to coincide with a test match will attest to the fabulous hospitality, the colour and occasion that is so brilliantly presented to the visiting spectators.

The West Indies is one of the 12 teams that has held Test status since 1928.  What this means is that the team gets to participate in a number of test matches each year.  The winter season in Europe, sees cricket take off in the Caribbean.  For instance, at the time of going to press, Bangladesh is playing the Windies with England slated to play in the Caribbean in January/February 2019.

In 2007 the West Indies hosted the Cricket World Cup and in 2010 the World Twenty20 competition was hosted in the Caribbean.  It is firmly at the top table in terms of being part of the international cricketing fraternity.

The only drop in popularity was when test matches were suspended during the war years.  Also, in the 1980s when the Caribbean suffered a severe economic depression, there was a marked decline in the popularity of the game.  I am delighted to report that cricket is firmly back on the agenda.  It is still the sport of choice for most Caribbean citizens with football and basketball following behind.

The ultimate English export, Cricket has its origins in a world that no longer exists.  In the Caribbean it began its life being played in the garrisons by the soldiers who were posted abroad.  Overtime, the ban on players being other than white, fell away as the colonists felt it was a way to bring better integration on the islands.  Yet sadly, although black players were allowed play they were, for some time, banned from taking tea in the Club house with their fellow white players.  Happily such archaic rules are now only a page in the history of the game in the Caribbean.

The very first inter-island competitions took place in 1865 between Demerara and Barbados.  This was an entirely white player game.  The fitness and talent of the black players soon made it desirable for teams to include them as the competition between the islands was fiercely contested.

In 1928, the West Indies played their first Test cricket matches in England.  Five of the team were Barbadian the remaining players made up from other islands.  George Challenor, considered the first great West Indian batsman played on this team. 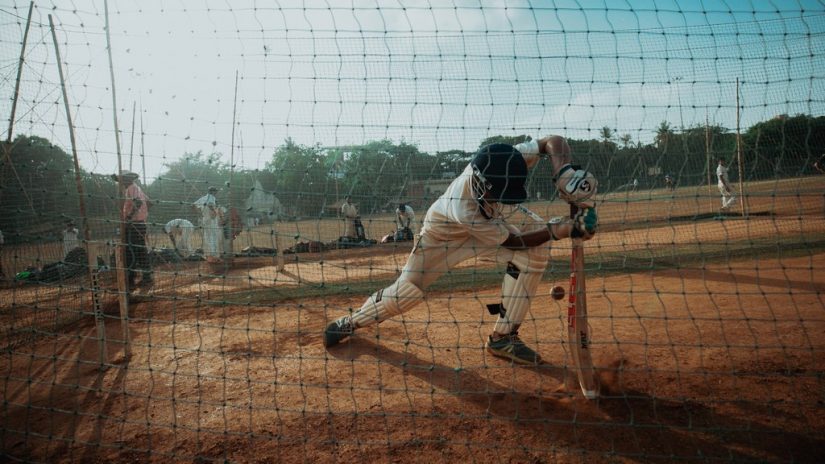 One of the notable events when the West Indies first toured Australia 1930/31 is that the great Herman Griffith of Barbados became the first ever bowler to dismiss the legendary Don Bradman for a test match duck.

It would be impossible to write any article about West Indies cricket without mentioning the remarkable Sir Viv Richards.  Mr Richards, a former Antiguan cricketer, represented the West Indies over a career that saw him become an international icon of the game.

In 2000, a panel of 100 cricketing experts named the imposing Richards as one of the five Cricketers of the Century.  He is listed alongside Sir Donald Bradman, Sir Garfield Sobers, Sir Jack Hobbs and Shane Warne.  In December 2002, the Wisden Cricketers’ Almanack (a bible for cricketing enthusiasts) named Richards as the greatest ODI batsman of all times.  He was the first ever cricketer to achieve 20 ODI Man of the Match Awards.

They say the measure of a great sportsman is not just his prowess on the pitch but his honour and integrity as a man off the field.  In 1983 and 1984, Mr Richards was offered a blank cheque to play with a rebel West Indies cricket team in South Africa during the Apartheid era.  He refused.  The cricket stadium of Antigua Barbuda is named after their famous son.  He is one of sports instantly recognisable stars as in all of his cricketing career he never wore a cricket helmet.  All part of his heroic legend!

If you are struggling to find the perfect gift for the one you love this Christmas or perhaps you like to plan ahead and get Valentine’s Day organised, then let me recommend you book an Exceptional Villa in either Barbardos, St Lucia or Antigua/Barbuda – or perhaps find the perfect Villa in all three.  The dates you should aim for are 23 January right up to 13 February … and beyond.  The English cricket team are heading for the West Indies for a Test Series that will see them play three test matches across these three destinations.  As an avid fan, it’s a no-brainer.  As a newby to the world of West Indies Cricket it’s the ultimate introduction.

Cricket may have been invented in England but in the West Indies it’s come of age.  There isn’t a child anywhere in the Caribbean who cannot bowl or bat.  It’s a sport that really comes alive under the tropical skies.  Dust off that Panama, dig out your old Club tie and start 2019 with a Pimms and a smile.  Leave the draughty and soggy English shores and escape to the West Indies.  It seems rather fitting that the West Indies vs England Test series ends on 13th February as Valentine’s Day is the universal day to acknowledge our love and passion …. It might just be cricket that ignites romance for you!

Born and raised in Co Kerry, lived in London, New York, San Francisco, Dublin. Owner of one very battered suitcase, a well-worn passport and a million memories. It seems very fitting for a travel writer that my surname translates as ‘Skilled Navigator’. Apart from an occasion when, aged 3, I got lost in a Supermarket in Tralee, I have managed to live up to my name! Curiosity is probably the driver that has sent me on magical mystery tours around the world. I want to ‘feel’ a place. I want all my senses to be engaged: from the history and geography that has influenced a country or city, the arts and achievements of its natives, anything and everything really. Regardless of whether I am on a local train travelling through Morocco, or poking around in Marconi’s study in Bologna or on a canal boat weaving through the heart of the English countryside, the same rules apply - ask questions, talk to locals, eat what they eat, sit quietly with nature and simply be. Assimilate as much as is possible so as to understand the soul of a place. That is my passion. That is the compass by which I navigate.