Polo, often called “The Sport of Kings”, is one of Barbados’s most popular, elite, and thrilling sports with teams coming from all over the world to play on one of its 5 beautiful polo fields. Polo in Barbados dates back to 1884 at the Garrison Savannah and in 1965 moved to the club at Holders. The first polo ponies were brought to Barbados by the British Cavalry officers and the game was adopted quickly by some of the wealthy plantation house owners at the time.

Polo is a wonderful spectator sport and, even if you don’t know anything about it, it is worth going to one of the many glamorous games whilst you are on vacation in Barbados. Expect to see lots of famous faces and celebrities, as well as plenty of locals watching this fast and thrilling sport. If you’re lucky you might even catch a glimpse of one of the British Royal family who is regular polo players. As well as lots of famous and familiar faces, you will see lots of beautiful people wearing equally beautiful clothes. Supermodel 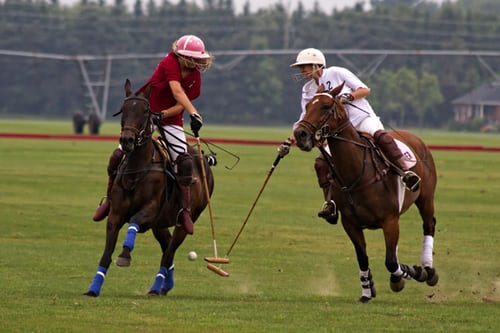 Jodie Kidd and her sister, renowned makeup artist Jemma Kidd, were brought up in Holders House beside Barbados main polo club in Holders Hill. The house and its beautiful grounds have been known for wonderful entertainment by great International Performers during the Holders Season.

Matches always draw large crowds with children being especially delighted by the spectacle, and by the majesty of the horses and the skill of the riders as the players and their horses charge up and down the field to score points by hitting the ball into the goal.

If you are new to the sport, Polo is a team sport played on horseback where the aim of the game is to score goals using either a small white plastic or wooden ball 3 to 3 and a half inches in diameter against opposing teams. A rider must stay mounted for the goal to count. What makes the sport even more exciting is that the riders must control their mounts with one hand whilst they hold and strike the ball with their mallet in the other hand. For anyone is has ever ridden a horse that can be up to half a ton in weight, this is no easy feat.

It is a thrilling sport played at speed on a large grass field of up to 300 yards long and 160 yards long. Each polo team consists of four riders and their mounts. The game lasts approximately 2 hours and is divided into periods called chukkas. In Barbados, each game has 8 Chukkas with each Chukka lasting 7 minutes long. Normally each team member will have at least 4 polo ponies changing them at each Chukka because the game is so intense and the ponies need to rest.

The polo season in Barbados runs from January until May and, during this time, you are likely to see visiting teams from all other the world such as England, Jamaica, Brazil, Argentina, Ireland, Italy, and more. Most of the matches, which are weather dependent, are played on Sundays but occasionally during the week. To find the full calendar of matches and times, visit http://barbadospoloclub.com/. But do check out in advance if they are going ahead as the matches can be cancelled if there has been too much rain.

The aptly names Polo Ridge is a great place to stay in Barbados if you want to be close to the Polo grounds. Luxury villas in this area include the sumptuous Shangri-La and captivating Stanford House. You will find some of the most luxurious properties to rent in Barbados located directly opposite the Barbados Polo Club at Holders in St James and also at the brand New Apes Hill Polo Club also in St James. The remaining three polo fields are at Lion Castle and Clifton in St Thomas and Buttals in St George.

Alexandra Baradi is the founder and owner of Exceptional Villas. She started the company 1992. Alex is a hotel manager by background and has travelled around the world in search of the best villas.

Her personal passion for travel and her entrepreneurial flair for making guest feel very special from the moment they enquire to the moment they arrive home, has enabled Exceptional Villas to become the world’s leader in luxury villas.

She believes anything is possible when you travel with Exceptional Villas and ensures you will be pampered every step of the way.

Alexandra and her team all have one thing in common; to provide their guests with an unmatched holiday experience and to go beyond expectations.

Each of the team members specialise in just one destination rather than in multiple destinations allowing them to become total experts in their fields.

Both Alexandra and her team spend much of their time travelling to all the destinations inspecting new villas and re-inspecting already featured villas.